Hawaii was chosen Tuesday as the site for the world's biggest telescope, a device so powerful that it will allow scientists to see some 13 billion light years away and get a glimpse into the early years of the universe. 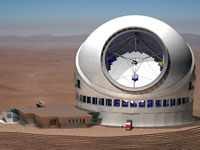 The telescope's mirror — stretching almost 100 feet in diameter, or nearly the length of a Boeing 737's wingspan — will be so large that it should be able to gather light that will have spent 13 billion years traveling to earth. This means astronomers looking into the telescope will be able to see images of the first stars and galaxies forming — some 400 million years after the Big Bang.

"It will sort of give us the history of the universe," Thirty Meter Telescope (TMT) Observatory Corp. spokesman Charles Blue said, The Associated Press reports.

"This is pretty cool stuff. The story of TMT is really the history of the universe", said Charles Blue, TMT.

"As you look further into space, you're really looking further back in time. If you glance at the sun you're looking about 8 minutes into the past."

It will create hundreds of jobs for several years. The Thirty Meter Telescope Observatory Corporation also plans to give a million dollars a year to students on the Big Island in a community benefits package.

If all goes smoothly work could begin in two years and finished up in 2018.