The Food and Drug Administration announced Thursday it is conducting a safety review of the asthma drug Xolair after data from an ongoing study suggested an increased number of heart attacks and strokes among patients who use it. 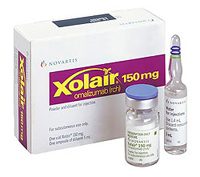 The drug, made by Genentech and co-marketed by  was approved in 2003. The study, which started in 2004 and is slated to end in 2012, was mandated by the agency as part of its post-approval process, CNN reports.

The data from the trial was supplied to the FDA by Genentech, the maker of Xolair. The trial includes some 5,000 patients taking the drug and an additional 2,500 patients who are not using Xolair, according to the FDA.

Xolair, which is given by injection, is used for those people whose asthma is not controlled by inhaled corticosteroids.

Currently, the FDA is not telling people using Xolair to stop taking the drug. However, the agency believes patients and doctors should be aware of potential problems when taking the drug, including the possible risk of heart attack and stroke, Pediatric SuperSite reports.

Meanwhile a spokeswoman for South San Francisco-based Genentech said the company and partner Novartis are "committed to patient safety," and will continue gathering safety information about the drug. No changes are planned for the drug's labeling, The Associated Press reports.