Russian engineers broke a red wax seal and six men emerged from a metal hatch after 105 days of isolation in a mock spacecraft, still smiling after testing the stresses that space travelers may face on the journey to Mars. 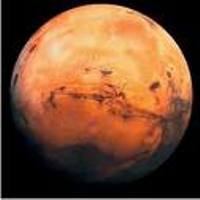 Sergei Ryazansky, the captain of the six-man crew, told reporters at a Moscow research institute near the Kremlin on Tuesday that the most difficult thing was knowing that instead of making the 172-million mile (276-million kilometer) journey they were locked in a windowless module of metal canisters the size of railway cars.

The men, chosen from 6,000 applicants, were paid euro15,000 ($20,987) each to be sealed up in the mock space capsule since March 31_ cut off almost entirely from the outside world, The Associated Press reports.

Also, an actual staffed mission, if one occurs, could be decades off, but Russian scientists and officials said the Mars-500 project, which will culminate in a 520-day isolation experiment scheduled to start next year, was an indication of Russia’s revitalized role in space exploration after years of struggling to keep a foothold in orbit.

“At this time we are moving from the era of preserving Russia’s place in space to its advancement,” Vitaly A. Davydov, the deputy chief of the Russian Federal Space Agency, said at a news conference. “This is a promising project that will guarantee the orbital deployment of equipment that will fly to the moon and Mars.”, New York Times reports.

Meanwhile, the six men were monitored constantly as they responded to physical tests in cramped conditions designed to better understand how humans would cope on a Mars mission, that would take at least 500 days.

All six smiled, waved and put their arms around each other as they emerged into the first sunlight they had seen since March 31 last, giving no indication that any personal animosities developed in the quarantined environment.

"The level of understanding and motivation of the crew was perfect from my point of view as commander," Russian cosmonaut and scientist Sergei Ryazansky told a news conference at Moscow's Institute of Medical and Biological Problems, Reuters reports.