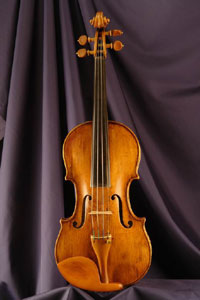 Chicago police say a stolen 18th century violin worth $200,000 about has been found in good condition near the city's downtown, WAND reports.

The violin was taken when someone used a spare key to enter the home on the 5200 block of North Wayne Street sometime between midnight and 7 a.m. on July 7.

According to a police report, the key was kept under a planter in the homeowner's yard, Examiner.com reports.

On July 9, the owner of the Gagliano violin stolen from a house on the 5200 block of North Wayne on July 7 received an anonymous call directing her to the 200 block of South Michigan Avenue.

The victim called police, who accompanied her to the area where they recovered the violin, according News Affairs Officer Robert Perez.

No one has been arrested in the violin’s theft, The Chicago Sun-Times reports.