According to statistics Wisconsin continues to lead the nation in confirmed and probable swine flu cases with 5,861- about 17% of the national total. Texas, the state with the next highest number of cases, has 3,991, almost 2,000 fewer than Wisconsin. 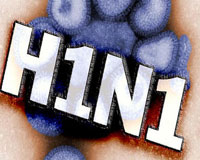 However, the cases here have resulted in a much smaller number of deaths than in other state. Wisconsin has had four deaths (three in Milwaukee) - a number surpassed by 10 states. New York has suffered the highest number of deaths from swine flu with 44, followed by California with 21 and Texas with 17, Milwaukee Journal Sentinel reports.

Meanwhile the head of the World Health Organization said on Thursday that H1N1 influenza is causing mild symptoms that go away without medication in most patients, but care-givers should be alert for warning signs of severe cases.

"The overwhelming majority of patients experience mild symptoms and make a full recovery within a week, often in the absence of any form of medical treatment," WHO Director-General Margaret Chan told a conference in Cancun, Mexico, Reuters reports.

In the meantime researchers report that the new H1N1 influenza strain may be just a little less catching than seasonal flu, but seems a little better able to cause stomach upsets.

Genetic analysis and lab experiments with the virus show it lacks a piece of genetic material that makes ordinary flu viruses so transmissible, a team of U.S. researchers found.

Researchers in the Netherlands, meanwhile, found it lives very well in the nose and their findings suggest it has the ability to stay around for a long time - and get worse, Reuters reports.