Statin cholesterol drugs, widely used medications, do not increase the risk of developing amyotrophic lateral sclerosis, or Lou Gehrig's disease, US medics said as a result of analyzing dozens of appropriate studies. 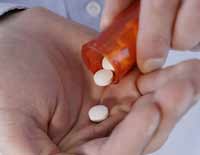 The FDA said that it has analyzed 41 clinical trials after it had received a high number of reports of amyotrophic lateral sclerosis in patients treated with drugs that lower the level of cholesterol in the blood.

Such statins like Pfizer’s Lipitor and AstraZeneca Plc's Crestor are used by millions of people all over the globe. The analysis showed that nine out of 64.000 patients treated with cholesterol-lowering drugs were diagnosed with Lou Gehrig's disease during long-term clinical trials. That compared with ten of 56,000 patients who were treated with placebos.

The results of the research showed that the number of incidents of the disease in patients treated with statins was not higher as compared to those treated with placebos.

Amyotrophic Lateral Sclerosis (ALS, sometimes called Maladie de Charcot, or, in the United States, Lou Gehrig's Disease) is a progressive, usually fatal, neurodegenerative disease caused by the degeneration of motor neurons, the nerve cells in the central nervous system that control voluntary muscle movement. As a motor neuron disease, the disorder causes muscle weakness and atrophy throughout the body as both the upper and lower motor neurons degenerate, ceasing to send messages to muscles. Unable to function, the muscles gradually weaken, develop fasciculations (twitches) because of denervation, and eventually atrophy because of that denervation. The patient may ultimately lose the ability to initiate and control all voluntary movement except for the eyes.

Cognitive function is generally spared except in certain situations such as when ALS is associated with frontotemporal dementia. However, there are reports of more subtle cognitive changes of the frontotemporal type in many patients when detailed neuropsychological testing is employed. Sensory nerves and the autonomic nervous system, which controls functions like sweating, generally remain functional.