iPhone does not cancel other cell phones in Japan

Kentaro Tohyama is proud of his new iPhone. He stood overnight in line to get it when the device became available in Japan for the first time. But the 29-year-old computer engineer isn't about to part with his made-in-Japan cell phone either. 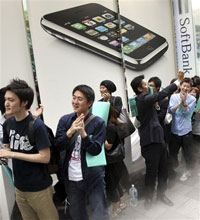 iPhone does not cancel other cell phones in Japan

That kind of cautious response to the July 11 arrival of Apple Inc.'s phone appears common in Japan.

The iPhone was welcomed here with long lines of gadget fans. But it's also being seen as shockingly alien to this nation's quirky and closed mobile world, somewhat like the 19th Century "black ships" of U.S. Commodore Matthew Perry that forced an isolationist Japan to open to the West.

Japan's cloistered mobile system has its own icons for e-mail and other unique tools. That means many people, even iPhone fans like Tohyama, are likely to stick to their old-style phones lest they be left out of familiar communication circles.

For example, young people in Japan take for granted the ability to share phone numbers, e-mail addresses and other contact information by beaming it from one phone to another over infrared connections. Being without those instantaneous exchanges would be the death knell on the Japanese dating circuit.

While the iPhone has Bluetooth wireless links, it has no infrared connection.

The iPhone lacks other technology long available on Japanese cell phones, such as digital TV broadcasts, a built-in camcorder, voice recognition and an "electronic wallet" function.

Japanese cell phone customers also might struggle with the fact that using the iPhone requires both hands. The Japanese style of texting relies mainly on a thumb - so much so that experienced users are dubbed "oyayubi zoku" or "thumb tribe."

Also missing from Steve Jobs' much-praised design: a hole in the handset for hanging trinkets. Westerners may scoff at them as childish, but having them is a common social practice in Japan.

For all these reasons, analysts say it's unclear whether the iPhone will catch on with the masses in Japan or end up a fad with the computer-savvy niche.

Sales so far in Japan are hard to discern. Apple said it sold 1 million iPhones in the first three days its newest model was on the market, but the company offered no regional breakdown.

Softbank Corp., the Japanese carrier of the iPhone, said it sold out of the devices on the first day. But it did not reveal how many had been available. One clue comes from GfK Marketing Services Japan Ltd., which said Softbank sold half of all mobile phones in Japan that day, up from a typical 19 percent.

Many Japanese buyers were curious about the iPhone's sleek design. And some acknowledged that the device might show the Japanese market some new tricks.

Tohyama's eyes were opened by the iPhone's quick access to the Internet, much like that of a personal computer.

Some Japanese cell phones show Web pages, but access on even the latest models is slower than on the iPhone. Most Japanese phones don't present as colorful a picture as the iPhone does. Instead they often show black-and-white text outside of sites tailor-made for cell phones. And generally you can't watch YouTube clips on Japanese phones; that is possible on the iPhone.

"Until I owned an iPhone, I didn't see as clearly how closed Japanese content was," Tohyama said. "It was not a global standard at all."

But he was just as quick to note that he needs to keep tapping into his old Japanese cell phone because he needs its special smiley icons and other images for e-mail.

Other new iPhone owners had more basic concerns. Shunji Hagii, 37, who crafts animation and movie figures, said he doesn't need the emoticon e-mail that Tohyama relies on. Instead, he says of his iPhone: "I wish the battery life were better."