The global rollout of Apple Inc.'s revamped iPhone kicked off Friday in Asia with countdown celebrations and quick sellouts as crowds of gadget fans streamed into stores after long waits. 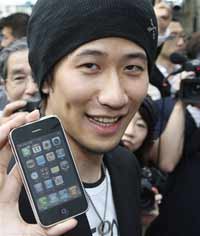 The target of desire was Apple's much-hyped new product that uses 3G, or third-generation, cell phone technology - an upgrade of the model that went on sale last year in the United States and several other nations.

Australia, New Zealand, Hong Kong and Japan were the Asia-Pacific locations getting the new phone, with festivities shifting to Europe as the global day and 22-nation launch progresses. In the United States, phones will be available at 8 a.m. in each time zone.

"Just look at this obviously innovative design," said Yuki Kurita, emerging from a Tokyo store with the brand new 3G-capable iPhone he barely knew how to use.

The 23-year-old system engineer, among about 1,500 people who had camped out on the street by one downtown store, said he was too excited to feel tired and called his mother to boast about his new buy.

"I am so thrilled just thinking about how I get to touch this," he said, carrying bags of clothing and a skateboard he had used as a chair during his wait.

Kurita acknowledged, though, that the iPhone would replace only one of his two phones. He and other Japanese buyers said they wanted to check out how services such as e-mail worked before they decide to forsake their old phones.

The iPhone's capabilities are less revolutionary in Japan, where people have for years used tech-heavy phones from domestic makers such as Sharp Corp. and Matsushita Electric Industrial Co. to exchange e-mail, search for restaurants, download video and play games.

But networks prevalent up to now offer only limited access to the Web, and the iPhone is designed to browse the Web in much the same way computers do. Its arrival marks a significant foreign entry in a market dominated by local brands.

Japanese media, including The Nikkei, the nation's top business daily, are talking about "iPhone shock," alluding to Commodore Matthew Perry's black ships that forced an isolationist feudal Japan to open to Western influence in the mid-1800s.

The frenzy over the iPhone was visible elsewhere in Asia as well.

In Hong Kong, designer Ho Kak-yin, 31, wearing a T-shirt that said, "Jealous?" was the first in line in a queue of about 100 inside a Hong Kong shopping mall.

"I'm very excited. It's very amazing," Ho said, after lining up two hours ahead of the kickoff.

Hundreds queued outside stores in New Zealand's main cities got their iPhones earlier at midnight Thursday.

Exactly how many iPhones will be available has been uncertain, fueling the hype about the Apple gadget with a cool-factor reputation.

"This is the year that the cell phone becomes an Internet-connecting machine," Masayoshi Son, president of Softbank Corp., the only carrier selling the iPhone in Japan, said at the countdown ceremony. "Today is that day that will make it real, and it's a historic day."

Softbank said it sold out of iPhones at three major Tokyo stores before they opened. It has refused to say how many iPhones are being sold and said it didn't have a nationwide store tally.

Tomohiko Katsu, a 38-year-old Japanese banker, said he has rarely lined up for any product in his life but wanted to make sure he got the iPhone and got in line Thursday afternoon.

"All the features come packed in a compact machine," he said. "It's really small for a mobile PC device."

A report this week by Mizuho Securities Co. said the iPhone's had potential to change lifestyles and bring new business opportunities.

Japanese tend to spend an hour or more on daily train commutes, and the iPhone could get them Netsurfing more than reading or listening to music, it said.

The iPhone's arrival could also change the relationship between manufacturers and carriers because of Apple's clout. Up to now, carriers have had considerable leverage over manufacturers, the report said.

In Hong Kong, Apple and its local service provider Hutchison Telecom, have limited initial sales to 1,500 people who have been longtime customers or were preselected by an online lottery. Still, those picking up the gizmo were welcomed with a rollout event at a mall.

Simon Evans, a 39-year-old chef in Hong Kong, was convinced his new iPhone would simplify his life.

"I can use e-mail, the calendar. It will help plan my day," he said. "A lot of my friends are very jealous. They want an iPhone, but I have one now."

Apple plans to sell the just-released 8-gigabyte iPhone for US$199 in the United States and the 16-gigabyte version for US$299 . The prices are about half what the old iPhone sells for in the U.S., where an 8-gigabyte model goes for US$399.

The company, based in Cupertino, California, says it has sold about 6 million iPhones since last year. It hopes to sell 10 million by the end of 2008.