Macs to be promoted in corporate environments managed with Microsoft Windows

Apple’s Macintosh computers will now be promoted on the marked by a group of five software companies which created an alliance for this purpose. The Macs will be promoted in corporate environments managed with Microsoft Windows. 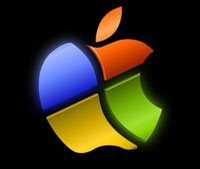 Macs to be promoted in corporate environments managed with Microsoft Windows

The alliance consists of Atempo, Centrify, Group Logic, LANrev, and Parallels. All these companies deal with technology which provides interconnection and operability between Mac OS X and Windows.

The alliance with start its activities with education works to show that Macs are not difficult to use in Windows environments.

The companies hope that take advantage of the growing number of Mac users in the world.

Production of the Mac is based on a vertical integration model in that Apple facilitates all aspects of its hardware and creates its own operating system that is pre-installed on all Macs. Apple exclusively produces Mac hardware, choosing internal systems, designs, and prices. Apple does use third party components, however; current Macintosh CPUs use Intel's x86 architecture. Previous models used the AIM alliance's PowerPC and early models used Motorola's 68k. Apple also develops the operating system for Macs, currently Mac OS X 10.5 "Leopard". This is in contrast to most IBM compatible PCs, where multiple vendors create hardware intended to run another company's software. The modern Mac, like other personal computers, is capable of running alternative operating systems such as Linux, FreeBSD, and Microsoft Windows, the latter of which is considered to be the Mac's biggest competitor.

In 1998, a year after Steve Jobs had returned to the company, Apple introduced an all-in-one Macintosh called the iMac. Its translucent plastic case, originally Bondi blue and later many other colors, is considered an industrial design hallmark of the late 1990s. The iMac did away with most Apple standard (and usually proprietary) connections, such as SCSI and ADB, in favor of two USB ports. It proved to be phenomenally successful, with 800,000 units sold in 139 days, making the company an annual profit of US$309 million—Apple's first profitable year since Michael Spindler took over as CEO in 1995. The "blue and white" aesthetic was applied to the Power Macintosh, and then to a new product: the iBook. Introduced in July 1999, the iBook was Apple's first consumer-level laptop computer. More than 140,000 pre-orders were placed before it started shipping in September, and by October it was as much a sales hit as the iMac. Apple continued to add new products to their lineup, such as the eMac for the education market and PowerBook G4 laptop for professionals. The original iMac used a G3 processor, but the upgrades to G4 and then to G5 chips were accompanied by a new design, dropping the array of colors in favor of white plastic. Current iMacs use aluminum enclosures. On January 11, 2005, Apple announced the release of the Mac mini priced at US$499, the least expensive Mac to date.

Mac OS continued to evolve up to version 9.2.2, but its dated architecture—though retrofitted a few times (for example, as part of the PowerPC port, a nanokernel was added and Mac OS 8.6 was modified to support Multiprocessing Services 2.0 in Mac OS 8.6)—made a replacement necessary. As such, Apple introduced Mac OS X, a fully overhauled Unix-based successor to Mac OS 9, using Darwin, XNU, and Mach as foundations, and based on NEXTSTEP. Mac OS X was not released to the public until September 2000, as the Mac OS X Public Beta, with an Aqua interface. At US$29.99, it allowed adventurous Mac users to sample Apple’s new operating system and provide feedback for the actual release. The initial release of Mac OS X, 10.0 (nicknamed Cheetah), was released on March 24, 2001. Older Mac OS applications could still run under early Mac OS X versions, using an environment called Classic (though Apple has since removed Classic from Mac OS X in version 10.5, "Leopard"). Subsequent releases of Mac OS X were 10.1 "Puma", (September 25, 2001), 10.2 "Jaguar", (August 24, 2002), 10.3 "Panther", (October 24, 2003), 10.4 "Tiger", (April 29, 2005) and 10.5 "Leopard" (October 26, 2007). The Intel version of Leopard received certification as a Unix implementation by The Open Group.