Panasonic brings yet another idea for life

Panasonic's latest PC offering is small enough to cradle in one hand, yet strong enough to handle the rough and tumble of extreme environments. 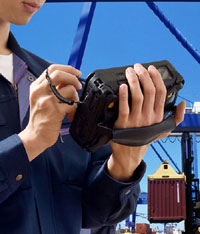 Panasonic brings yet another idea for life

Japan's Matsushita Electric Industrial Co., whose Toughbook series of rugged laptops is used by U.S. police, military and utility workers, on Wednesday unveiled a compact, "ultra-mobile" version that is practically as easy to handle as a PDA but with all the features of a standard PC.

And like other Toughbook models, it's made to survive.

The CF-U1 mini-tablet emerged unscathed after demonstrators Wednesday dropped the device 120 centimeters (3.9 feet) face down, then dunked it in four quarts of water.

Shigeo Okuda, general manager of Matsushita's marketing group, said the CF-U1 broadens the reach of rugged laptops, which have been too bulky thus far to carry directly on site to warehouses and construction zones.

The tablet features a 5.6-inch touch-screen display, a thumb-operated keyboard, Bluetooth and wireless Internet. With a handstrap in the back, the CF-U1 is held like a flat camcorder.

"This will be used in different ways than the Toughbook now," Okuda said. "This is a completely new category of rugged PCs."

Through its Panasonic brand, Matsushita holds a leading 61-percent share of the rugged-PC market worldwide, according to the company. It sold 574,000 units in 2007, and hopes the CF-U1 will extend its dominance.

The company will launch overseas sales of the 2.3-pound device in August, and begin sales in Japan in October for an unspecified price. It aims to sell 90,000 CF-U1 units overseas and 10,000 units in Japan in a year.

Matsushita's strategy in the competitive PC market has been to focus exclusively on business- and field-use laptops. It does not make standard desktop models or those targeting the average home.

Its Toughbook line is primarily sold to companies and governments, and includes models offering multiple levels of ruggedness to withstand the harshest of conditions.