Apple’s intention to unveil a new version of a media player-mobile phone hybrid has created quite a buzz on the Web. Some say that the new iPhone will have a slow roll-out, others ay that the new phones will be cheaper. Bloggers continue to discuss the new specifications and share images of the new handset. It is noteworthy that Apple stores have run out of iPhones. Employees tell customers to be patient and wait until Monday. 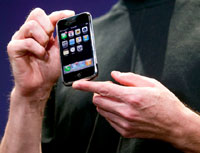 Apple plans to sell 10 million of its new phones by the end of October. Carriers will reportedly sell the new handsets at a much lower price than the existing one.

Fresh details of the new iPhone can be found on countless blogs. One of the most credible sources says that the firmware of the new device has been released. The chip from Infineon built to mesh with the 3G high-speed networks sits at the heart of the phone. The new iPhone is also said to carry GPS. To crown it all, the phone seem to include video chat support.

The iPhone is an Internet-enabled multimedia mobile phone designed and marketed by Apple Inc.. It has a multi-touch screen with virtual keyboard and buttons. The iPhone's functions include those of a camera phone, portable media player (iPod), in addition to text messaging and visual voicemail. It also offers Internet services including e-mail, web browsing, and local Wi-Fi connectivity. It is a quad-band mobile phone that uses the GSM standard, and hence has international capability. It supports the EDGE data technology.

Apple announced the iPhone on January 9, 2007. The announcement was preceded by rumors and speculations that circulated for several months. The iPhone was initially introduced in the United States on June 29, 2007 and is in the process of being introduced worldwide. It has been confirmed that it will be released in Japan by SoftBank in 2008. It was named Time magazine's Invention of the Year in 2007.