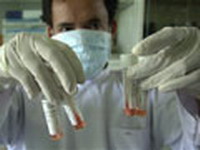 An epidermal growth factor receptor (EGFR) inhibitor was recommended for a first-line treatment of metastatic colorectal cancer patients with a certain genetic profile.

Erbitux was discovered by ImClone Systems and is distributed in North America by ImClone and Bristol-Myers Squibb, while in the rest of the world distribution is by Merck KGaA.

EMEA recommendations are a good pass onto the market and a high possibility of the European Commission endorsement.

The drug faces stiff competition from Vectibix, Amgen approved by the FDA in November 2006. One of the main differences is that Erbitux is an IgG1 antibody, and Vectibix an IgG2 one. Their properties are not absolutely identical. Erbitux costs $30,000 for eight weeks of treatment per patient.

Erbitux is believed to operate by binding to the extracellular domain of the EGFR of all cells that express EGFR, which includes the subset "cancer cells", preventing ligand binding and activation of the receptor. This blocks the downstream signaling of EGFR resulting in impaired cell growth and proliferation. The drug has also been shown to mediate antibody dependent cellular cytotoxicity (ADCC).

When treating metastatic colon cancer, the drug is given concurrently with the chemotherapy drug irinotecan (Camptosar), a form of chemotherapy that blocks the effect of DNA topoisomerase I, resulting in fatal damage to the DNA of affected cells. While there remains some scientific controversy on this, assessment for EGFR expression is required for use in Colorectal Cancer, but not in Head & Neck Cancer.