Lyme disease, the most common tick-borne disease in the Northern Hemisphere, is currently gathering speed. The U.S. Health Department is highly concerned over ways to reduce the growing numbers. 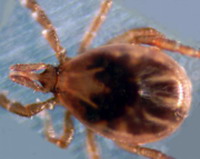 In a majority of cases, symptoms can be eliminated with antibiotics, especially if diagnosis and treatment begins early in the course of illness. Late, delayed, or inadequate treatment can lead to "late stage" or "chronic" Lyme disease that can be disabling and difficult to treat. At one time there was a vaccine available but it was pulled from the market because of slow sales.

Tests on ticks at the DOH laboratories prescribe the following prevention measures:

- tuck shirts and pantlegs in

Although Lyme disease has now been reported in 49 of 50 states in the U.S, about 99% of all reported cases are confined to just five geographic areas (New England, Mid-Atlantic, East-North Central, South Atlantic, and West North-Central).

The number of reported cases of the disease have been increasing, as are endemic regions in North America . For example, it had previously been thought that B. burgdorferi sensu lato was hindered in its ability to be maintained in an enzootic cycle in California because it was assumed the large lizard population would dilute the prevalence of B. burgdorferi in local tick populations, but this has since been brought into question as some evidence has suggested that lizards can become infected.