Francis S. Collins, a 58-year-old American physician-geneticist, plans to resign as a director of the National Human Genome Research Institute (NHGRI) on Aug. 1. 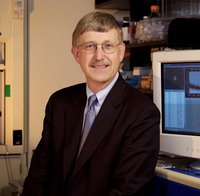 His decision is linked with his desire to pursue other professional opportunities.

He also plans to work on a book about the use of genetic information to develop personalized strategies for preventing and treating illness.

He will be temporally replaced by his deputy, Alan E. Guttmacher, a pediatric geneticist.

Collins took on the leadership of the National Center for Human Genome Research in 1993, which became NHGRI in 1997. As director, he oversaw the International Human Genome Sequencing Consortium and many other aspects of what he called "an adventure that beats going to the moon or splitting the atom."

In 1994, Collins founded NHGRI's Division of Intramural Research (DIR), a collection of investigator-directed laboratories that conduct genome research on the NIH campus and that has developed into one of the nation's premier research centers in human genetics.

In addition to his long list of contributions to basic genetic research and scientific leadership, Collins is known for his close attention to ethical and legal issues in genetics. He has been a strong advocate for protecting the privacy of genetic information and has served as a national leader in efforts to prohibit gene-based insurance discrimination. Building on his own experiences as a physician volunteer in a rural missionary hospital in Nigeria, Collins is also very interested in opening avenues for genome research to benefit the health of people living in developing nations.

Collins' accomplishments have been recognized by numerous awards and honors, including election to the Institute of Medicine and the National Academy of Sciences. On Monday, November 5, 2007, he received the Presidential Medal of Freedom from U.S. President George W. Bush. He was also present at the bill signing for the Genetic Information Nondiscrimination Act in the Oval Office, in recognition of his work in genetics, and his early papers and commentary on the need for such protections.