A new study suggests that donating blood can store complications that are rare but happen more often in teens than in older donors. 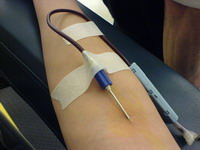 The study is a kind of precaution for teens who don’t know what to expect, thus providing information for good experience.

Scientists claim that teens are more susceptible to problems, but risks for having a bad reaction are still small.

The finger prick and needle insertion typically cause only minor discomfort. Negative medical reactions to blood donation are rare, and blood bank staff are trained to handle them.

Problems can occur, however, and fall into three groups:

- Hypovolemic reactions can occur because of a rapid change in blood pressure. These are far more common in donors that are extremely nervous, dehydrated, or who haven't eaten recently. These are typically mild, and nausea and fainting are generally the worst problems encountered. Donors with significant heart disease may have substantially more serious problems, and they are explicitly excluded from donating because of these risks.

- Physical trauma can occur at the needle site, generally due to poor needle placement. Serious problems can occur if the needle strikes an artery (Arterial stick) or damage the nerve, but both are extremely rare. Infections at the needle site (phlebitis) are unlikely because of the aggressive site preparation, but are theoretically possible.

- Donors sometimes have adverse reactions to the sodium citrate used in apheresis collection procedures to keep the blood from clotting. Since the anticoagulant is returned to the donor along with blood components that are not being collected, it can bind the calcium in the donor's circulatory system. Citrate reactions tend to cause tingling in the lips, but may cause convulsions or more serious reactions. Donors are sometimes given calcium supplements (e.g. Tums) to chew, or milk to drink, during the donation to prevent these side effects.

The team of scientists revealed that teens are more vulnerable because they may respond differently to stress than adults. Low weight and small stature sometimes also play a role.