Marijuana may break your heart

In July 2007, British medical journal The Lancet published a study that indicates that Marijuana users have, on average, a 41% greater risk of developing psychosis than non-users. The risk was most pronounced in cases with an existing risk of psychotic disorder, and was said to grow up to 200% for the most-frequent users. 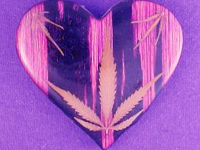 Marijuana may break your heart

This time a new study concerning Marijuana revealed the link of the drug and heart diseases. Scientists discovered that people, smoking Marijuana regularly, are prone to high risks of heart attack and stroke.

The study subjects, who reported smoking from 78 to 350 joints a week, had elevated amounts of a chemical that raises the amount of fats in their blood, wrote researchers in the Journal of Molecular Psychiatry. Higher levels of these fats, known as triglycerides, increase risks of cardiac disease and stroke.

The study suggests marijuana's active ingredient stimulates the liver to produce too much of the protein. Marijuana is the most-frequently used illegal drug in the U.S., according to the National Institute on Drug Abuse. Heavy marijuana use has been linked to psychosis, hypertension and memory loss, the authors wrote.

"Evidence exists that its abuse is a risk factor for cardiovascular and cerebrovascular disorders," wrote the authors, whose research was led by Jean Lud Cadet of NIDA, based in Bethesda, Maryland.

The study, of 18 users and 24 non-smokers, wasn't designed to measure whether the pot-smokers had heart disease.