Congressman Phil Hare held a press conference Monday afternoon on the Western Illinois University campus to address his concerns with health insurance and to express his continued determination to expand the State Children's Health Insurance Program. 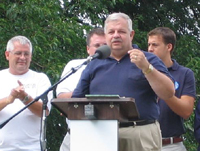 Hare said he has voted twice to expand the program that would cover an additional 154,000 children in Illinois, but both measures were vetoed by President Bush.

"We have 47 million Americans without health care, several million more are underinsured," he said while speaking in front of WIU's Beu Health Center. " I think it's a tragedy and we can do better, and we need to do better."

Moline residents Bill and Donna Fair stood with Hare and shared their personal experience with having a lack of health insurance.

Bill and his 33-year-old son, Eric, lost their health insurance after Butler Manufacturing, where they were both employed, closed its Galesburg plant in 2005.

Bill took early retirement, but his health insurance premiums soared to $1,700 a month. "You take that out of a pension check and you're still operating in the red," Bill said.

Bill and his wife went without health insurance, but Donna had medical issues and the bills piled up. In just nine months, the Fairs went $140,000 into debt.
In the meantime, their son was also going without medical insurance. When Eric began having chest pains in December 2006 and went to the hospital, he was sent home after an EKG test.

In February of this year he began to have more chest pains, and again went to the hospital, but was sent home after being given some antibiotics. On March 17, Eric was found dead.

"My son's death could have been prevented if he had been given the same health care as people with insurance have," an emotional Bill said. "You do an EKG but you don't see anything wrong, well, you go to the next step. With no insurance, you don't get a second step."

After Bill Fair spoke, Hare again reiterated his commitment to making sure everyone has access to quality health care.

Hare said that while the Democrats may not be able to push a health care plan through while a Republican is in the Oval Office, there are measures that can be taken now, like offering small businesses tax credits for providing health insurance to employees.

Hare said he intends to keeping trying for changes to health care, and will attempt to push the State Children's Health Insurance Program through for a third time.