Scientists may revolutionise the practice of IVF. They appear to be moving closer to identifying genes that determine which test-tube embryos stand the best chance of implanting in the womb and growing into healthy babies according to studies in Australia and Greece. 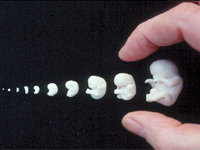 There is currently no way of telling which embryos are likely to develop into successful pregnancies from those that fail to even attach themselves in the womb.

As such, couples often opt to have more than one embryo implanted to increase chances of pregnancy. But this can result in multiple pregnancies that can be dangerous to both the mother and the babies.

Writing in the journal Human Reproduction, scientists in Australia said they may have obtained a better idea of the profile of embryos that stand a better chance of developing into healthy babies. "Now, embryos are chosen on the basis of appearance, shape and regularity."

"If we can just increase the predictive value by just 20 pecent, it will be a massive bonus to encourage people to accepting (single) embryo transfer without a loss of pregnancy outcome."

In the study, the scientists took "DNA fingerprints" by removing 8 to 20 cells from embryos five days after they were fertilised. These eggs were taken from 48 women in Greece undergoing the fertility treatment in vitro fertilisation (IVF).

Of these 48 women, 25 eventually became pregnant and 37 babies were born.
The scientists later matched the DNA fingerprints with babies that were born and found they all contained genes that were involved in cell adhesion, cell communication, cellular metabolic processes and response to stimuli.

"We believe that it will be possible to refine our gene set to a smaller number of genes that is more highly predictive of (an embryo's) viability and ability to develop to a term pregnancy when transferred to a receptive uterus than current selection criteria," the scientists say.

The team aims to narrow the list of genes to just 5 to 10.