U.S. researchers have found the way to predict heart attack risk. It can be heard by listening for a certain noise in the artery supplying blood to the brain. 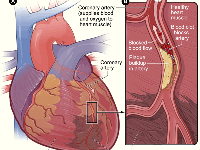 People with the sound, called a bruit, from the carotid artery in the neck were twice as likely to suffer an attack and more than two-and-a-half times as likely to die from heart disease, than those without it, researchers reported in the Lancet.

A carotid bruit is heard when using a stethoscope to listen to blood flow in the artery, which brings blood to the head and neck. The presence of the sound indicates that there's a fatty build-up called atherosclerosis, which may explain the increased risk, the scientists said. Nurses or physicians usually notice the sound by chance during a medical check-up of otherwise healthy people.

"Our study has shown that the presence of a carotid bruit significantly increased the likelihood of cardiovascular death or heart attack,'' Christopher Pickett from the Walter Reed Army Medical Center in Washington, D.C., wrote in the journal report.

Pickett and colleagues analyzed data from 17,295 patients in 22 studies from the U.S., Canada, the U.K., the Netherlands and Switzerland and did a follow-up for four years. In four studies comparing patients with and without carotid bruits, those with the noise were more than twice as likely to have a heart attack or die from cardiovascular disease.

Carotid bruits are a sign of a higher stroke risk, according to the American Heart Association. A carotid bruit is different from a heart murmur, which is a whooshing or swishing sound heard during a heartbeat.

Physicians should listen for carotid bruits in patients with an increased risk of suffering a heart attack to identify those that may benefit the most from preventive therapy, Pickett said.