Four thousand people are reported dead after a cyclone tore through the Southeast Asian country of Myanmar late Friday night and early Saturday morning. Over 10 hours, winds traveling up to 150 miles per hour struck Yangon, Myanmar's largest city, and dumped 20 inches of rain on the harbor town, formerly known as Rangoon. According to CNN, the country's foreign minister expects that the final death toll to equal to more than 10,000 that would make the storm -- Tropical Cyclone Nargis -- one of Myanmar's most deadly natural disasters and the second largest in the region after the tsunami of 2004, which took nearly 200,000 lives. 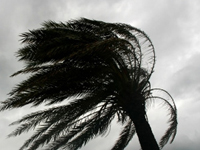 Nargis is a cyclone because it arose in the Indian Ocean.

What differentiates cyclones from hurricanes and typhoons is where they arise. All are storms with wind speeds of more than 74 miles per hour. If one is born in the Atlantic Ocean or east of the international date line in the Pacific, it's called a hurricane; in the northwest Pacific, it's a typhoon; in the Southwest Pacific and Southeastern Indian Ocean, it becomes a severe tropical cyclone; in the north Indian, it's a severe cyclonic storm; and in the southwest Indian, it is referred to as a tropical cyclone. They can carry as much energy as 10,000 nuclear bombs—making them nature's most destructive storms. These storms typically begin to crop up in the Northern hemisphere around this time of year, as ocean waters warm.

Nowadays, there is a raging debate over whether climate change, and the overall rise in global temperature it is supposed to bring, will cause tropical cyclones to develop more often and become more powerful in the future.