The publisher of the controversial "Grand Theft Auto 4" video game sued the Chicago Transit Authority on Monday, accusing it of pulling ads promoting the blockbuster without explanation. 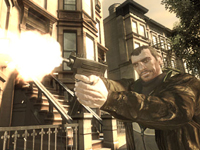 The video game's publisher Take-Two Interactive Software Inc. sued the transit authority in Manhattan federal court for violating its free speech and contractual rights, saying it pulled its posters within days of the ads first appearing on April 22.

Take- Two accused the authority and its sales agent, Titan Outdoor LLC, of violating a $300,000 (150,000 pounds) ad campaign agreement that included running "Grand Theft Auto 4" poster ads on the sides of buses and transit display spaces throughout the Chicago transit system scheduled for six weeks between April and June.

The suit seeks an order for the transit authority to run the ads as well as pecuniary loss of at least $300,000.

The advertisements were removed following a report by a Fox News affiliate that questioned why the ad was allowed to run after a wave of violent crimes in Chicago, the suit said.

Past "Grand Theft Auto" games have been criticized for depicting violence including beatings, carjacking, drive-by shootings, drunk driving and prostitution.

Representatives of the Chicago Transit Authority were not immediately available for comment.

Grand Theft Auto IV is a sandbox-style action-adventure video game developed by Rockstar North. It is the ninth title in the Grand Theft Auto series and the first in its fourth generation. Grand Theft Auto IV was released worldwide (except Japan) on 29 April 2008 for both PlayStation 3 and Xbox 360.Exclusive Xbox 360 episodic packs are due for release in August 2008 via Xbox Live.

Prior to its release, Grand Theft Auto IV was very highly anticipated, with experts predicting record-breaking sales and revenue. Since its release, the game has received universal acclaim from video game critics. The game has also generated some controversy regarding its content.