Adolescents who were adopted as infants are significantly more exposed to a psychiatric disorder than those who were not adopted, a study released Monday has found. 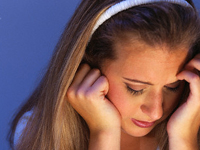 While emphasizing that most of the adoptees in the study were psychologically healthy and faring well, the researchers said that as a group they faced a greater risk for two psychiatric conditions: attention deficit-hyperactivity disorder and oppositional defiant disorder.

For example, about 7 in 100 adolescents studied who were not adopted met the criteria for attention deficit-hyperactivity disorder, which is about half the number for adopted adolescents, said lead study author Margaret Keyes, of the University of Minnesota.

Attention deficit-hyperactivity disorder interferes with a person’s ability to concentrate, sit still and control impulsive behavior. Young people with oppositional defiant disorder are uncooperative and hostile toward authority figures in a way that seriously impairs their day-to-day functioning.

Researchers performed psychiatric assessments on all subjects as well as interviewing parents, teachers and the adolescents. Ages of those studied ranged from 11 to 21.

The researchers had thought that adoptees born overseas would be at higher risk of psychiatric disorders than those who were born and placed in the U.S., but they found the reverse was true. The assessments did find higher levels of separation anxiety among international adoptees. Teachers also rated this group as significantly more anxious in general than their nonadopted peers.

Adopted children tend to be over-represented when it comes to seeing a mental health professional, experts said. Dr. Peter Nierman, a child psychiatrist who formerly reviewed applications for financial assistance from the state of Illinois for kids with serious mental health problems, said requests from parents of adopted kids ran 10 to 20 times higher than for biological children.

Adoptive parents may be quicker to seek out such help because as a group they are better educated, have higher incomes and are more accepting of counseling.

But Keyes said her study suggests the differences between adopted and non-adopted adolescents cannot be explained solely by parents’ willingness to seek help.

Experts said other factors might include genetics, prenatal malnutrition, drug and alcohol exposure and the post-natal environment, such as conditions in orphanages. The scientists also pointed to the significance of being cut off from one’s background and the anxiety the experience can provoke, even when it occurs at an early age.