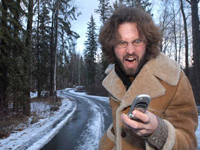 The FCC would limit payments to wireless carriers seeking funds from the Universal Service Fund to help subsidize the cost of providing cell phone service in rural areas. The USF, which is supported by a tax on long-distance and regular subscriber line charges paid by wireless, Internet, and traditional phone customers, has been temporarily capped after the program paid nearly $1.12 billion last year to phone companies operating in rural areas. In 2001, the fund paid out only $15 million. The increase in funding has led to higher taxes on phone bills for consumers.

Congress is currently working on reforming the USF. And the cap ensures that rates remain at March 2008 levels until the reform package is complete.

Regulators hope capping the fund now will help slow the increase of charges being added to consumers' phone bills.

But in order to achieve this goal, funds had to be made available to subsidize service in rural parts of the country.

In many ways, the USF has been a great success. Over 80 percent of the U.S. population subscribes to a cell phone service. But there are still significant gaps in coverage, where service is not available, because it is simply too expensive for operators to put up cell towers. It inconvenience not only countrymen but also travelers.

Still, regulators and large phone companies worry that their customers have to pay ever growing fees.

Phone companies such as Verizon Communications, whose customers contribute to the bulk of the fund, were pleased to see the cap in place.

"Consumers will be happy to hear the FCC is taking control of the fund's growth," Tom Tauke, Verizon's executive vice president of public affairs, said in a statement. "This is a responsible first step. The next step is comprehensive reform of the universal service high-cost fund to make it more efficient and targeted to consumers who need it."

While AT&T's customers, like Verizon's subscribers, pay a huge chunk of the USF, it also happens to be a major recipient of these wireless subsidies. But the company had already agreed to a cap as a condition of its acquisition of Dobson Communications last year. Alltel, another major wireless operator that relies on USF funds, also agreed to a cap on the fund as a condition of its deal to be bought out by a private investment group.