Spore Creature Creator to be released in June

Electronic Arts and Maxis announced the release date of the Spore Creature Creator. Gamers will get it on June 17. 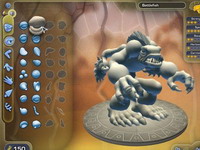 Spore Creature Creator to be released in June

The demo game will be available in two different versions. There will be a paid version (for $9.99) and a free version that will be downloadable from Spore.com and included for free, bundled with The SimCity Box. The free version of the editor will only contain 25% of the available creature parts that are found within the paid version. The player will be able to "test drive" their creatures through different animations and allow the player to import friends' creatures through the Sporepedia at Spore.com.

In Spore you will taste evolution, taking characters from primordial existence to civilization. Besides the individual characters, Spore-ophiles will be able to establish tribes and conjure up buildings and vehicles, including UFOs.