Chicago water officials  expressed concern over the pollution of Lake Michigan drinking water.They said they're testing it for the presence of pharmaceutical drugs and other unregulated chemicals. 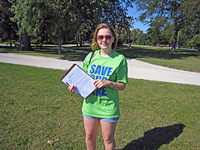 The announcement Thursday came on the heels of a Chicago Tribune report that found trace amounts of prescription drugs and other chemicals in local drinking water, the newspaper reported.

The Tribune, which hired an independent lab to test tap water, found very small amounts of a prescription anti-seizure drug, a common painkiller, a nicotine byproduct, caffeine and two chemicals used to make Teflon and Scotchgard.

"This is an important environmental issue that has been brought to light," Spatz said. "We should be monitoring and making sure it isn't getting in the water. And we need the health agencies to figure out if there is anything to be worried about."

Lake Michigan is the only one of the Great Lakes wholly within the borders of the United States; the others are shared with Canada. It has a surface area of 22,400 square miles (58,016 km²), making it the largest freshwater lake in the U.S., the largest lake entirely within one country by surface area (Lake Baikal, in Russia, is larger by water volume), and the fifth largest lake in the world.