Lambert-St. Louis International Airport is going to establish two one-mile walking paths inside in order its passengers can spend their time usefully while waiting for their flights. 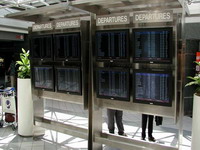 For that purpose the airport will cooperate with the American Heart Association that has designed the walking paths – a part of its campaign called Start!

The airport also has a live music performance area, rocking chairs for passengers and a new cell phone parking lot.

The deal is profitable for both sides as it boosts healthy lifestyles and better services for passengers and visitors.