Autum Aquino, who was born with HIV and entered the spotlight in 1991 as a first-grader at Portland's Reiche Elementary School, when she talked publicly about having AIDS, has died. 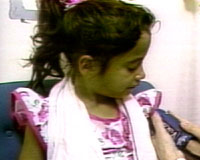 As a young girl, Aquino was credited with spreading knowledge about AIDS at a time when misperceptions about the disease were widespread.

Aquino's mother, Theresa Dannemiller, who also had AIDS, died in 1993.

The transmission of the virus from the mother to the child can occur in utero during the last weeks of pregnancy and at childbirth. In the absence of treatment, the transmission rate between the mother to the child during pregnancy, labor and delivery is 25%. However, when the mother has access to antiretroviral therapy and gives birth by caesarean section, the rate of transmission is just 1%. A number of factors influence the risk of infection, particularly the viral load of the mother at birth. Breastfeeding increases the risk of transmission by 4.04%. This risk depends on clinical factors and may vary according to the pattern and duration of breast-feeding.

Studies have shown that antiretroviral drugs, caesarean delivery and formula feeding reduce the chance of transmission of HIV from mother to child. Current recommendations state that when replacement feeding is acceptable, feasible, affordable, sustainable and safe, HIV-infected mothers should avoid breast-feeding their infant. However, if this is not the case, exclusive breast-feeding is recommended during the first months of life and discontinued as soon as possible.

In 2005, around 700,000 children under 15 contracted HIV, mainly through MTCT, with 630,000 of these infections occurring in Africa. Of the children currently living with HIV, almost 90% live in sub-Saharan Africa.

In Africa, the number of MTCT and the prevalence of AIDS are beginning to reverse decades of steady progress in child survival. Countries such as Uganda are attempting to curb the MTCT epidemic by offering VCT (voluntary counseling and testing), PMTCT (prevention of mother-to-child transmission) and ANC (ante-natal care) services, which include the distribution of antiretroviral therapy.