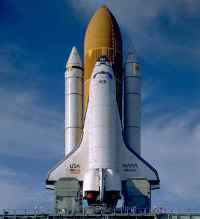 NASA private contractors may lose their jobs in 2010 when its space shuttle program comes to an end.

While civil servants will remain secure, about 8,000 people will be cut when NASA starts a new program - Project Constellation - to create a new generation of spacecraft for human spaceflight, consisting primarily of the Ares I and Ares V launch vehicles, the Orion crew capsule, the Earth Departure Stage and the Altair lunar lander. These spacecraft will be capable of performing a variety of missions, from Space Station resupply to lunar landings.