Once the ban removed, seek for victims. At least 3 gray wolves, that recently have made the list of federal endangered species, were killed within 3 days after the ban removal. 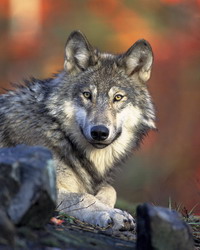 U.S. Fish and Wildlife Service announced that 2 wolves were killed Friday near an elk feedground in the Pinedale area in Sublette County. The authorities discovered the bodies at once, as one of the wolves had a tracking collar.

Another case was also reported Friday. A wolf was killed by a rancher who tried to protect his livestock.

All the three cases took place in Wyoming 's predator zone that is now an attractive place for wolf hunters. The only condition is that every killed wolf, its sex and location should be reported within 10 days.

The current freedom of hunting raises concerns among defenders of wildlife who are going to sue the Fish and Wildlife Service to retain Endangered Species Act protections for the wolves.