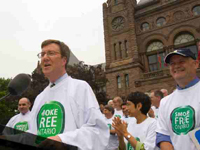 Smokers have heard all of the life-saving reasons why they should quit. The free program, called EX, wants to make current smokers ex-smokers by targeting how they can quit.

In 2006-2007, the anti-smoking American Legacy Foundation tested EX in four U.S. cities. The successful result brought together several national organizations and 14 states, including Washington, to form the National Alliance for Tobacco Cessation to launch the campaign nationally. Each state contributed funds to support the campaign at a charge of 25 cents per smoker in the state. Washington contributed $208,172 for the 832,690 estimated smokers in the state.

The campaign uses tools designed in part by Mayo Clinic researchers and former and current smokers. There will be national television and radio ads and a Web site, Becomeanex.org that creates a personalized plan for smokers and provides an online community where smokers can share stories of quitting. The site provides videos and helps smokers "relearn" how to live without cigarettes in three steps:

- Relearning smoking habits and triggers and how to deal with them. For example, some people smoke after every meal or while driving or when they are stressed.

- Relearning how much of an addiction smoking is and how medications can increase the chances for quitting.

- Relearning support and surrounding themselves with family and friends to help them quit.

Television ads began Monday, and radio ads are scheduled to begin in May, Selecky said. In April, a coffee truck with the EX logo will give out free coffee and information about the campaign in Seattle and Olympia. The campaign will also be a part of the Sasquatch Music Festival at The Gorge during Memorial Day weekend.

A youth anti-smoking campaign was launched in September.

"What we've learned is that we need to keep getting people's attention in new ways," Selecky said as she prepared to board a plane back to Seattle on Monday. Washington residents "travel and they can see this same campaign in other parts of the country. It's about relearning life without cigarettes."