U.S. researchers, using satellite imagery, have discovered that a large part of the Antarctic ice shelf dissolves as a result of climate change. 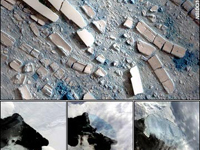 The discovery was made known at the University of Colorado-Boulder's National Snow and Ice Data Centre (NSIDC) in the U.S. on Wednesday. They said satellite pictures showed a 160-square-mile portion of Antarctica's massive Wilkins Ice Shelf has begun to collapse because of rapid climate change in a fast-warming region of the continent.

“While the area of collapse involves 160 square miles, a large part of the 5,000-square-mile ice shelf is now supported only by a narrow strip of ice between two islands,” Ted Scambos, lead scientist at the NSIDC, said.

“If there is a little bit more retreat, this last ‘ice buttress’ could collapse and we will likely lose about half the total ice shelf area in the next few years,” he said.

The researchers said that during the past 50 years, the western Antarctic Peninsula has experienced the biggest temperature increase on Earth, rising by 0.9 degrees Fahrenheit per decade.

“The satellite images indicate the Wilkins Ice Shelf began its collapse on Feb. 28,” they said.

Meanwhile, the UN Secretary-General Ban Ki-moon has expressed concern over the reduction of Antarctic glaciers, as a result of global warming.

His spokesperson, Michele Montas said on Wednesday that, “when the Secretary-General visited Antarctica last year, the plane that was carrying him was unable to land on one ice shelf because it had cracked and it was unsafe to land”.

“The reduction of the size of Antarctica's glaciers has been one of the Secretary-General’s concerns,” she added.