A Virginia hospital has asked more than 300 former patients to come in for blood tests because a nurse suspected of infecting patients with hepatitis in Texas worked there last year. 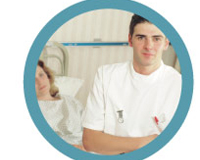 Retired Army Capt. Jon Dale Jones, 45, was arrested this month in Miami on federal charges of assaulting three patients and possession of a controlled substance by fraud.

Federal prosecutors said they believe Jones spread hepatitis in 2004 at an El Paso military hospital by diverting fentanyl — a powerful painkiller often used for anesthesia — from patients to himself.

At least 15 military service members or their relatives are believed to have been infected.

Officials at Riverside Regional Medical Center in Newport News said Jones worked there from July through December. Staff members have identified 310 patients who came into contact with Jones and asked them to return for tests for hepatitis C.

Hepatitis C is a blood-borne disease that can lead to cirrhosis of the liver or liver cancer. It is treatable, but there is no cure. Symptoms vary but can include nausea, vomiting, diarrhea, fatigue, pain and jaundice.

It's not clear exactly how the patients in El Paso were infected. Jones, 45, has denied using dirty needles. He has pleaded not guilty and was released on bond.