The MacBook Air, an ultra-thin Macintosh notebook computer, was hacked within two minutes by Charlie Miller who was generously rewarded with a laptop and $10,000 for his effort. 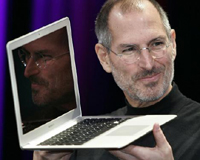 Miller, who had previously exposed vulnerabilities in the iPhone last year, was among a handful of contestants who entered the PWN 2 Own contest that took place at the CanSecWest security conference.

Show organizers tempted contestants with a Sony Vaio, a Fujitsu U810 and the MacBook Air, which were given away to the first person able to hack into system and read the contents contained in a hidden file. On the second day, Miller was able to direct one of the show's organizers to a site laced with his exploit code, which ultimately gave him complete control over the computer in a matter of seconds.

Details of his exploit wouldn't be disclosed due to a non-disclosure agreement, but since the hackers were instructed to take advantage of pre-loaded software, it’s possible he could've gained access to the computer through Apple's Safari web browser.

The MacBook Air is produced by Apple Inc. It is part of the MacBook family and features an optional solid-state hard drive.