New research revealed that, like excessive gaming or virtual sex, e-mail and text messaging might be part of a compulsive-impulsive spectrum disorder and a form of addiction. 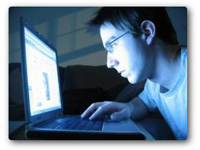 Dr. Jerald Block, said there were four symptoms: suffering from feelings of withdrawal when a computer cannot be accessed; an increase need for better equipment; need for more time to use it and experiencing the negative repercussions of their addiction.

“The chief reasons I see to consider it are motor vehicle accidents that are caused by cell phone instant messaging, stalking and harassment via instant messaging, and instant messaging at social, educational, (and) work functions where it creates problems. It should be a pervasive and problematic pattern, though, not isolated incidents,” Dr. Block said.

Internet addiction disorder (IAD) is a theorized disorder originally made as a satirical hoax by Ivan Goldberg, M.D., in 1995. He took pathological gambling as diagnosed by the DSM-IV as his model for the spoofed description.

Although IAD was meant to be a hoax, it is promoted as a real condition by some supporters. Supporters often divide IAD into subtypes by activity, such as pornography, overwhelming and immoderate gaming, inappropriate involvement in online social networking sites or blogging, and Internet shopping addiction. Activities which, if done in person, would normally be considered troublesome, such as compulsive gambling or shopping, are called net compulsions. Others, such as reading or playing computer games, are troubling only to the extent that these activities interfere with normal life.