AT&T Inc. said on Thursday it would launch mobile television services in May from MediaFlo USA, a unit of Qualcomm Inc, in an effort to enhance income from services other than phone calls. 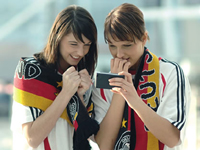 AT&T Inc.is the largest provider of both local and long distance telephone services, wireless service, and DSL Internet access in the United States.

AT&T said it would offer MediaFlo to users of the Vu phone from LG Electronics Inc and the Access from Samsung Electronics Co Ltd and plans two exclusive channels it did not name.

Spokesman Mark Siegel said AT&T waited until May to offer the service as it was "a brand new service on a brand new network, and two brand new devices." The company plans to reveal its cost at the time of its service launch.

AT&T's service arrives about a year after its biggest rival Verizon Wireless, a venture of Verizon Communications and Vodafone Group Plc, started selling MediaFlo, which is broadcast live over a network built by chip maker Qualcomm.

But some analysts said that mobile television was taking longer than some expected to take off partly because of weaker-than-expected consumer demand as the service does not blanket the entire country or work on all phones.

"There's still a question whether consumers are ready to watch a significant amount of TV on their handsets." said Stanford Group analyst Michael Nelson.

Gina Lombardi, division head of MediaFlo USA, said in a telephone interview that by the time AT&T offers its service in May it will be available in about 55 markets, covering a potential 130 million customers. MediaFlo markets include Los Angeles, New York, Chicago, Dallas, Orlando and Philadelphia.

Lombardi said she was happy with the number of people using the service and "the amount of time they're watching it" but declined to give subscriber numbers.

Subscriber growth should improve as MediaFlo improves coverage in markets such as New York and as AT&T starts offering its service and both carriers sell a bigger choice of phones that support the service, she said.

Qualcomm hopes to be able to expand its service to markets covering more than 200 million potential customers in February 2009, when television companies have to vacate wireless airwaves that they own.