Viagra much in demand ten years after its release

It took Viagra ten years to get the Food and Drug Administration's stamp of approval. 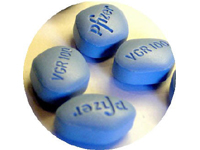 Viagra much in demand ten years after its release

Originally tested as a heart medication, researchers in England discovered that male patients given Viagra would get aroused.

The drug causes the release of nitric oxide (NO), which affects certain organs thus resulting in increased inflow of blood and an erection.

Here are some facts about the little blue pill:

Roughly 1 billion Viagra tablets have been recalled since the drug debuted.

- The drug has been evaluated in more than 120 clinical trials involving more than 16,000 men.

- Viagra was also tested in about 3,000 women as a potential treatment for sexual arousal disorders. But the trials were "inconclusive," and Pfizer announced in 2004 that it had stopped them.

Most men prefer Viagra over the other two medications, Levitra and Cialis, said Brian Stark, D.O., a Hamot Medical Center family physician. It accounts for 60 percent of all E.D. prescriptions.

"Viagra has more name recognition. It's been around the longest," Stark said. "Doctors and patients have the most experience with it."

Otherwise, doctors prescribe it to adult males of all ages.