U.S. health officials are examining AIDS drugs sold by GlaxoSmithKline Plc and Bristol-Myers Squibb Co after a study showed a higher heart-attack risk compared with other HIV medicines, the Food and Drug Administration said on Thursday. 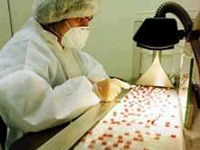 The FDA said it was still evaluating the data on Glaxo's Ziagen and Bristol-Myers' Videx, and that the review "may result in the need to revise labeling for the products."

"Until this evaluation is complete, health-care providers should evaluate the potential risks and benefits" of each HIV drug their patients are taking, the FDA said in a notice on its Web site.Glaxo and Bristol-Myers said their own evaluations had not found that the drugs raised the chances of a heart attack.

The concern arose from a study of more than 33,000 patients called the D:A:D. Study, which is examining the short- and long- term effects of various HIV drugs.

Patients taking either Ziagen or Videx "had a greater chance of developing a heart attack than patients taking other medications," the FDA said.The risk did not appear to increase over time and seemed reversible after the drugs were stopped, the agency said.

The FDA said it currently believed analyses of the D:A:D study were incomplete and noted that researchers had not evaluated heart-attack risk when patients were taking two other NRTIs, Gilead Sciences Inc's Viread and Emtriva.

Glaxo spokesman Marc Meachem said the data had been presented at a medical conference in February. Glaxo analyzed its own databases and "did not see any sign of an increased risk of heart attack" with Ziagen, he said.

Ziagen, which is known generically as abacavir, had 2007 global sales of $218 million. The drug also is a component of Glaxo's Trizivir, Epzicom and Kivexa AIDS drugs, which had more than $1 billion in combined 2007 sales.

Bristol-Myers spokeswoman Sonia Choi said "we haven't seen an increase of cardiovascular events in our studies of Videx or in our (company) safety database."

Videx is sold generically and, therefore, is not one of the company's top products. The drug's generic name is didanosine.

The FDA said the results from Glaxo and Bristol-Myers analyses were inconclusive.

Viread is known generically as tenofovir, and Emtriva is known as emtricitabine.
The FDA notice was issued as part of an effort to notify the public about early signs of potential safety concerns before officials have reached a final conclusion.