Sony reported a disturbing incident. There was a break of the PlayStation Network this morning which could have exposed the passwords of some of its users. 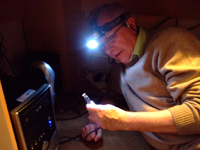 A message on the PlayStation website this morning read: "Although unlikely, it is possible that the passwords of a small percentage of PlayStation Network users may have been changed through unauthorized access, making it possible to view users' personal information and/or use the wallet for the PlayStation Store."

In the statement Sony said it had taken immediate action to correct the issue. System security has been restored, a company representative said. Customers who might have been affected by the breach are being notified by Sony.

As a precaution, Sony advises PSN users sign in to the service and verify the integrity of their account.