New Yorkers getting fatter every year 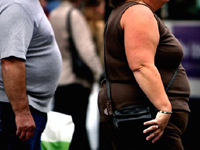 New Yorkers getting fatter every year

"Obesity and with it diabetes are the only widespread major health conditions that are getting worse in New York City," said Health Commissioner Thomas Frieden.

The city ran up to far worse figures than the nation, which posted a 6% increase in obesity and flat diabetes rates for those years.

Health officials blamed syrupy sodas in part for the city's fat surge, saying that 27% of New Yorkers drink nearly two sodas a day - 300 nutrition-free calories."When people count calories, they do often forget to include drinks, which can account for a large number of extra calories," said Cathy Nonas, the Health Department's director of physical activity and nutrition.The biggest soda slurpers were those with the highest risk for obesity, namely men, blacks, Puerto Ricans and Mexicans and those in low-income families.

But weight woes aren't limited to one group in New York. The survey of 10,000 adults showed that obesity ballooned 20% among whites in the city compared with 7% nationally. Obesity rates here grew 14% among Hispanics but nationally didn't rise significantly for groups other than whites.

Foreign-born New Yorkers experienced the sharpest increase in obesity at 33% since 2002, meaning that 22.4% of that population is obese.

The gains in diabetes cases crossed income and cultural lines, with increases among whites, men, older adults and folks living in high-income neighborhoods.