According to a new research dementia, or a progressive decline in cognitive function due to damage or disease in the brain, is closely connected with such a factor as fat. 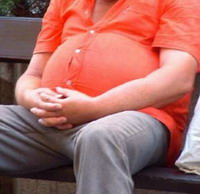 Those people who have weight problems and pile up abdominal fat are more likely to develop dementia in comparison with those having lowest amount of abdominal fat.

The study involved 6,583 adults with the highest amount of abdominal fat aged 40-45. The results showed that the risk to develop dementia was 3 times higher than usual.

This factor even outran the one considered commonly and largely outspread. That is a family-history factor, that only doubles the risk of developing the disease.

In addition to high chance of diabetes, stroke and heart disease, belly fat adds another factor to be scared of – the loss of brain function.

The question rises: how can fat influence brain activity and lead to dementia?

It may sound like this: hormones and proteins released by abdominal fat contribute to creating of amyloid plaques in the brain, which are associated with Alzheimer's. And it turned out that abdominal fat is more biologically active than fat located in other areas of the body.

On the other hand dementia may be not directly resulted from fat and proteins, but may just be linked to obesity-related diseases.

In dementia, affected areas in cognition may be memory, attention, language, and problem solving. Higher mental functions are affected first in the process. Especially in the later stages of the condition, affected persons may be disoriented in time (not knowing what day of the week, day of the month, month, or even what year it is), in place (not knowing where they are), and in person (not knowing who they are). Is not it a sufficient stimulus for doing exercise and keeping to a diet?