Following the Voyager encounters with Saturn's moon Enceladus in the early 1980s, scientists postulated that the moon may be geologically active based on its young, reflective surface and location near the core of the E ring. 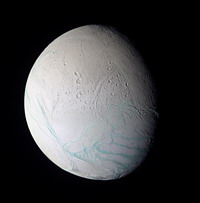 Additional observations were acquired during a flyby on March 12, 2008. Data on this flyby revealed additional organic chemicals in the plume, including simple and complex hydrocarbons such as propane, ethane, and acetylene and water vapors. This finding further raises the potential for life beneath the surface of Enceladus. The composition of Enceladus's plume as measured by the INMS instrument on Cassini is similar to that seen at most comets.

These discoveries have prompted the adjustment of Cassini's flight plan to allow closer flybys of Enceladus. A planned extended mission for Cassini includes seven close flybys of Enceladus between July 2008 and July 2010, including two passes at only 50 km in the later half of 2008.