One in three families can’t afford medical care, and 25 percent have to resort to financial tricks to pay for the care they needed, according to a survey of more than 26,000 people released Tuesday by the AFL-CIO. 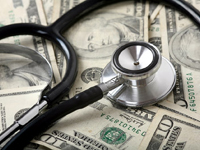 American Federation of Labor and Congress of Industrial Organizations, commonly AFL-CIO, is a national trade union center, the largest federation of unions in the United States, made up of 54 national and international unions (including Canadian), together representing more than 10 million workers.

Most of the survey respondents were employed, college graduates, union members and had insurance, a group that AFL-CIO President John Sweeney said "you would expect to have positive experiences with America's health-care system. They're hurting."

Meanwhile 76 percent of people surveyed who lacked insurance themselves and 71 percent with uninsured children said someone in their family did not visit a doctor when sick because of cost. Sixty-seven percent of the uninsured and 66 percent of those whose children are uninsured said they skipped medical treatment or follow-up care recommended by a doctor.

The survey also found that:

- 96 percent of people with insurance are somewhat or very concerned about being able to afford insurance.

- 53 percent of Medicare recipients said their prescriptions are not covered or are unaffordable.

The survey, one of the largest on health care, was conducted by Peter D. Hart Research Associates between Jan. 14 and March 3.