South Park fans will soon be able to watch any episode of the seminal animated show free online, thanks to a deal between Trey Parker and Matt Stone and Comedy Central's parent company, Viacom. 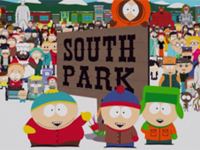 According to Comedy Central reps, Parker and Stone are the driving force behind South Park Studios, the series' new online HQ offering free viewing of all 12 seasons of South Park . Currently in its beta format, the site and its episodes are ad-supported, but require no additional fees to view as many episodes as a fan's heart desires.

In an appropriately glib statement, Parker and Stone said they were inspired to start the site when they got "really sick of having to download our own show illegally all the time. So we gave ourselves a legal alternative."

New episodes will appear on the site soon after airing on Comedy Central and will remain available for one week. After 30 days, the new episode will return to the site permanently. Parker and Stone insist that the new service won't affect DVD sales as hardcore fans of the show could still want to own the episodes in "hard copy" form.

There's no word yet on whether other genre shows will follow South Park s new model.

South Park is an Emmy Award-winning, animated American television comedy series, created and written by Trey Parker and Matt Stone for Comedy Central. The show is set in the fictional town of South Park, Colorado. The series has been distributed and aired by Comedy Central since 1997. The show is well-known for its pop-culture parody, scatological humor, and satirical handling of current events.

Since its debut on August 13, 1997, the show has aired 169 episodes over 12 seasons. The twelfth season began airing on March 12, 2008. The show is contracted to produce new episodes through a fifteenth season, until late 2011.