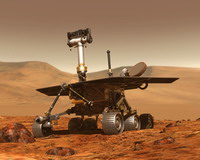 A team headed by Mikki Osterloo of the University of Hawaii, Honolulu, discovered salt deposits in 200 places on southern Mars. It means that once there was a great amount of water on Mars and there even existed Martian life.

Scientists suppose that the salt deposits formed approximately 3.5 to 3.9 billion years ago. At that time the climate and weather conditions were more friendly. The deposits were traced down at quite different places, so it can’t be an ocean.

The new discovery gives scientist another stick to lean on in their findings and suppositions about life on Mars. On Earth, salt preserves organic material. Bacteria have been revived in the laboratory after being preserved in salt deposits for millions of years.