According to new data, AneuRx stent, used to prevent development of localized, blood-filled dilation (balloon-like bulge) of a blood vessel (aneurysms), is more dangerous than a surgery. 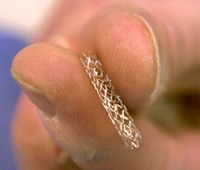 FDA reported Tuesday that Medtronic’s stent reveals higher risk of fatal outcome than a mere surgery. The risk goes up each year since the stent has been implanted.

Aneurysms most commonly occur in arteries at the base of the brain (the circle of Willis) and in the aorta (the main artery coming out of the heart), a so-called aortic aneurysm. The bulge in a blood vessel can burst and lead to death at any time. The larger an aneurysm becomes, the more likely it is to burst.

In comparison with 1.5 percent death rate of patients who have AneuRx stent only 0.18 percent die after a surgery, according to FDA.

On the contrary, Medtronic Inc claims that AneuRx's safety if compared with that of surgery in the days after treatment outweighs the risks it carries years later (4.8 percent of patients die in 30 days after a surgery, while only 1.2 percent die after implantation of stent). Besides, the results depend on age and health factors.