Apple has put wireless Internet technology on the forefront of its product line with an advanced version of its portable base station, the AirPort Express. 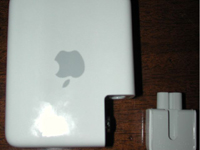 The AirPort Extreme was updated on January 9, 2007, to support the 802.11a/b/g and draft-n protocols. This revision also adds two LAN ports for a total of three. It now more closely resembles the 6.5-inch-square-shaped Apple TV and Mac Mini, and is about half the height of the Mini.

On August 7, 2007, the AirPort Extreme began shipping with Gigabit Ethernet, matching most other Apple products.

The new version comes with 802.11n, offering five times the data transfer speed and double the range of the older 802.11g models.

Another notable feature will be the AirPort Express's capacity to provide wireless Internet access to up to 10 people. It will also provide better support for remote printing, and music streaming by means of connecting an audio jack to any remote speaker.

"From the small and portable AirPort Extreme for workgroups of up to 50 users and the new Time Capsule for automated backups, Apple customers now have more great ways to extend their wireless networks with 802.11n", said Philip Schiller, the senior VP of global product marketing for Apple.

TechNewsWorld reported that the new AirPort Express also allows users to protect their files that may be exposed for third-party access during computer networking, merely by providing support for protected WiFi access. Its security measures are further increased with the installation of a built-in firewall.

The AirPort Express retains its portability at 6.7 ounces, and is designed to allow DSL or broadband connection sharing between PC and Mac users.