More Americans, primarily senior citizens or those about to retire, will likely develop Alzheimer's and other forms of dementia during their twilight years. 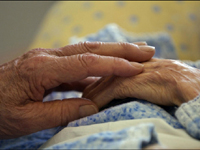 Dementia is the progressive decline in cognitive function due to damage or disease in the brain beyond what might be expected from normal aging. Although dementia is far more common in the geriatric population, it may occur in any stage of adulthood. This age cutoff is defining, as similar sets of symptoms due to organic brain dysfunction are given different names in populations younger than adulthood.

In dementia, affected areas in cognition may be memory, attention, language, and problem solving. Higher mental functions are affected first in the process. Especially in the later stages of the condition, affected persons may be disoriented in time (not knowing what day of the week, day of the month, month, or even what year it is), in place (not knowing where they are), and in person (not knowing who they are).

Alzheimer's disease is the most common cause of dementia, afflicting 24 million people worldwide. Alzheimer's is a degenerative and terminal disease for which there is currently no known cure. In its most common form, it occurs in people over 65 years old although a less-prevalent early-onset form also exists.

The disease can begin many years before it is eventually diagnosed. In its early stages, short-term memory loss is the most common symptom, often initially thought to be caused by aging or stress by the sufferer. Later symptoms include confusion, anger, mood swings, language breakdown, long-term memory loss, and the general withdrawal of the sufferer as his or her senses decline. Gradually the sufferer loses minor, and then major bodily functions, until death occurs. Although the symptoms are common, each individual experiences the symptoms in unique ways. The duration of the disease is estimated as being between 5 and 20 years.

Stephen McConnell, vice president of public policy for the Alzheimer's Association, estimates 18 percent or 14 million of the U.S.'s 79 million baby boomers will likely have Alzheimer's.

McConnell said age is the largest major factor linked with the disease. The oldest of the baby boomers, or those born between 1946 to 1964, will be 62 this year. After 65, chances of acquiring Alzheimer's doubles every 5 years.

Unless a cure is found, the U.S. will have half million new Alzheimer's patients by 2010 and almost a million by 2050. At present there are 5.2 million Americans with the disease, 70 percent of them, fortunately live with their families who help take care of them. The value of their unpaid care service was estimated at $89 million.

The growing number of Alzheimer sufferers will take a significant part of Medicare funds. In 2005, Medicare spent $91 billion on various types of dementia ailments, and the amount is expected to jump to $160 billion by 2010 and $189 billion by 2015.

To worsen its strain on public finances is a finding that while seniors are cutting back on expenses, the money did not end up on their retirement fund. A study sponsored by Scottrade said 25 percent of baby boomers have less than $25,000 as retirement savings.