More people can survive a cardiac arrest when emergency medical workers use a new resuscitation method that starts with a round of 200 chest compressions before a defibrillator shock, U.S. researchers said on Tuesday. 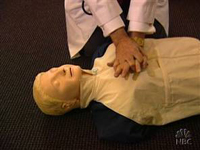 Rescue teams in Arizona who used the new approach on people who had a cardiac arrest outside the hospital tripled the survival rate of the standard approach.

"Cardiac arrest is incredibly common and survival is poor," said Dr. Bentley Bobrow, medical director for emergency services for the state of Arizona and a researcher at the Mayo Clinic in Scottsdale.

The new resuscitation method, which is not intended for bystanders, increases blood flow to the heart and brain when the heart stops pumping blood.

"Even if you could improve survival by a few percentage points, you will save thousands of people across the country," said Bobrow, whose study appears in the Journal of the American Medical Association.

For bystanders, the most important thing is to give chest compressions while waiting for an ambulance.

Cardiac arrest occurs when the heart stops circulating blood. Most often, people with cardiac arrest have a type of heart rhythm known as ventricular fibrillation, in which the heart quivers but does not pump blood.

If no shock is delivered in the first four minutes of this deadly rhythm, the heart stops altogether and it becomes much harder to get it restarted. During this phase, old-fashioned chest compressions can help push blood back into the heart, making it more likely to restart.