Taking the breast cancer pill Femara can significantly reduce the chances that a woman's cancer will return, even long after she has stopped taking the estrogen blocker tamoxifen, U.S. researchers said on Monday. 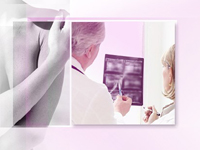 They said post-menopausal women who took the Novartis AG drug Femara anywhere from one to seven years after finishing a five-year regimen of tamoxifen reduced the risk the cancer would come back by 63 percent.

The drug, known generically as letrozole, cut the risk of cancer spreading to other areas of the body by 61 percent, and cut the risk that a tumor would develop in the unaffected breast by more than 80 percent.

Letrozole belongs to a new class of breast cancer drugs known as aromatase inhibitors, which block the production of estrogen that can lead to cancer. It is recommended for use in women past menopause.

The most widely used estrogen-blocking drug is tamoxifen, which was shown to cut the risk of cancer recurrence by close to 50 percent. But benefits of the pill, sold by AstraZeneca under the brand Nolvadex and also sold generically, fall significantly after five years.

Tamoxifen also raises the risk of death from strokes and endometrial cancer.

But more than half of breast cancer recurrences and deaths occur five or more years after completing tamoxifen.

"What is important for doctors and patients to recognize unfortunately is that the risk of recurrence of this type of breast cancer does not end at five years," Goss said in a telephone interview. "The risk continues and the benefit remains substantial of starting late on therapy," Goss added.

Goss' findings are based on an analysis of 1,579 women who decided to switch to letrozole from a placebo after the trial was halted. Their results were compared to about 800 women who stayed on the placebo.

Almost three years after the study ended, those who began letrozole had only a 2 percent risk of tumor recurrence, compared with almost 5 percent in those choosing no treatment.

Goss said the findings were limited by the fact that women made the decision about whether they would take the drug or not. Nevertheless, he said the findings are strong and likely to change how women with breast cancer are treated.

Another study in the journal showed that taking another exemestane soon after completing tamoxifen treatment reduced the risk of recurrence by 56 percent.