A group working to develop a gel or cream women could use to protect themselves against the AIDS virus said on Tuesday they have permission to use an experimental new drug from Merck and Co. 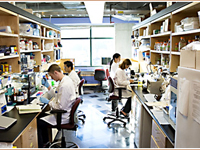 It is the sixth HIV drug to be tested by the International Partnership for Microbicides, said the group's chief executive officer, Dr. Zeda Rosenberg.

The drug is known only by its experimental name L'644. It is a member of a class of drugs known as gp41 fusion inhibitors. They stop the AIDS virus from attaching to the immune system cells it targets.

"It's pretty early in the life cycle for HIV. Most of us feel that, for a microbicide to be really effective, it has to get at the infection in its earliest timepoints."

Microbicides are products, such as gels or creams, that could be applied vaginally or anally to prevent transmission of the human immunodeficiency virus that causes AIDS.

So far, attempts to create a microbicide were not successful.

The AIDS virus has infected 33 million people globally, according to the World Health Organization. It has killed 25 million, and there is no vaccine to prevent the fatal and incurable virus.

Condoms can protect men and women, but health experts note that many men refuse to use them.

According to the United Nations, in sub-Saharan Africa almost 61 percent of adults infected with HIV are women. Most cases of HIV are transmitted sexually.

Merck & Co., Inc. is one of the largest pharmaceutical companies in the world. The headquarters of the company is located in Whitehouse Station, NJ. It was established in 1891 as the United States subsidiary of the German company now known as Merck KGaA. In common with many other German assets in the United States, Merck & Co. was confiscated in 1917 during World War I and set up as an independent company. It is currently one of the seven largest pharmaceutical companies in the world both by capital and revenue.

Merck & Co. or MSD describes itself as a “a global research-driven pharmaceutical company. Merck discovers, develops, manufactures and markets a broad range of innovative products to improve human and animal health, directly and through its joint ventures.”